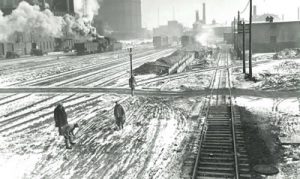 Originally the site was part of Toronto bay. Berkeley Street, which was the eastern edge of the original 1793 town site of York, terminated there. A formal garden and fairground existed there as well. Joseph Small, who was once mayor of the town, owned the property and built a wharf at the foot of Berkeley street. The first parliament building once overlooked the property as well. In the 1830’s the city authorized the filling of water lots to “the Windmill Line”, an imaginary line drawn from the Western Gap of the Bay to Gooderham’s Windmill, in return for landowners’ contribution to the development of the proposed esplanade. The old shore was gradually moved south hundreds of feet. It appears from the existing land survey, that half the structures on the site were built on landfill. In 1842 the site of Berkeley Castle Yard was occupied by orchards and sat at the water’s edge. Later, as infilling continued, the town of York grew.

In 1945, the mill was purchased by Monarch Knitting Mills. The area that is now Berkeley Castle Yard was built over and fitted with hot air machines to dry skeins of wool. However, Monarch’s presence was short-lived as only seven years later; the site was occupied by the Toronto Storage Company until 1965. For the next fifteen years, ownership changed numerous times and the buildings were used as low income housing and workshops. It was at this time that the building was referred to as “the castle”.

It is believed that land speculators held the building when it was purchased by A.J. Diamond and associates in 1975. By this time, the complex had deteriorated to the point that the fire Marshall condemned it.

When purchased by Diamond and associates the building was occupied by craftsmen, artists and musicians who lived, worked and flourished in the miserable surroundings. The place was called the castle because it was dark and dingy, but nevertheless it had a charming kind of vitality.

A.J. Diamond purchased the property with the intention of renovating the complex for residential use. The lands along the south of the Esplanade had deteriorated in a similar fashion to the factory. Plans were prepared by Diamond to create loft type residences, and an application was filed to change zoning from industrial to residential. Neighbouring industries, threatened by the possibility that residents would complain about noise and pollution, objected to the change in use. A compromise was reached in 1981, as commercial zoning was granted.

New architectural plans were prepared. The buildings were to be converted to office on the upper floors, served by two elevators, stairs, and washroom cores. The ground floor was to be converted to retail uses. The sheds in the yard were to be removed, creating a quiet open courtyard. The original structures were to be cleaned and repaired and restored in an economic fashion

Fairwin Construction who had been the lowest bidder out of six tendered prices, began the construction in January 1982, and finished in June 1983.

The first step in the construction was to demolish the numerous sheds erected in the yard and to clean out the maze of partitions on all the floors. Sandblasting of the interior and chemical cleaning of the exterior followed the cleanup. The initial transformation was incredible, leaving post and beam construction visible to the structural engineers inspection. A very thorough inspection took place, as each wood structural member was analyzed and then tagged for replacement or reinforcement if required.

Numerous design problems were encountered particularly with underground work, making the architects work extremely interesting. The water table was two feet below grade. Holes dug, quickly became filled with water. New footings sank into the mud. Alternatively, piles were driven to bedrock. These were deflected by wood cribs, which had been built to hold the landfill. All underground piping was laid onto concrete rafts.

Working with the post and beam construction was relatively easy, though techniques had to be devised to replace defective structural members, which terminated in metal bolster caps. Wood members which had knots in the wrong places, wit shear cracks, or which were insufficiently sized were replaced. Snow load columns and beams were installed. Floors were lifted and levelled by truck jacks. Steel frames were neatly installed in newly created vertical shafts.

The most laborious task was the repair and pointing of masonry. Over seven thousand spalled, broken and tarred bricks were replaced. The building was entirely re-pointed with coloured mortar to match the existing. A great number of openings in masonry were created to facilitate the architectural plan, particularity at ground level, where shopfronts required exposure.

Over six hundred new exterior doors and windows were installed in character with the industrial, architectural. The window replacement was tempered by economy. The oldest structure, dating back to 1868, called “the mill”, was refitted with single hung wood windows, with a full compliment of thermo panes and authentic motion bars. The other structures with the typical 3’ x 7’ openings were also fitted with single hung wood windows, though with a limited amount of panes (4 per window). The larger openings averaging 12’ x 8’ were replaced with thermally broken, painted aluminium units, which were carefully designed to maintain a delicate profile with an industrial character.

Building services and finishes were installed last. Complete contemporary HVAC systems and electrical distribution systems were installed throughout the complex. Leasing began in the fall of 1983.

Advertising agencies, garment showrooms, computer software programmers, architects have occupied the renovated buildings. Since the buildings have become occupied, the complex has become more interesting as life has returned to it. Interestingly, though not a factory, Berkeley Castle has become a place to work once more.