The Renovation of Berkeley Castle

Fairwin Construction, awarded the contract for the renovation, began work in January 1982. The first steps were to demolish the numerous sheds in the courtyard, to clean out the maze of partitions on all the floors and to sandblast the interior. This initial transformation exposing the post and beam construction was incredible. Chemical cleaning of the exterior was next, and the building was then ready for the inspection by structural engineers.

A very thorough inspection took place as each wood structural member was analyzed and then tagged for replacement or re-enforcement if required.

By the summer of 1982, construction picked up as restoration of the exterior walls began. This was one of the most laborious tasks. Over seven thousand bricks were replaced, and the entire building was re-pointed with coloured mortar to match the existing. At his same time windows were being replaced, floors levelled and structural repairs were being done. New work on the electrical, phones and plumbing were beginning.

As this part of the city is built on old landfill, the architects work became really interesting when design problems occurred regarding some of the underground work. Holes dug, quickly became filled with water, and new footings sinking in the mud. Alternatively piles were driven into the bedrock, even these were being deflected by wooden cribs which had originally been built to hold the landfill. All underground piping was laid onto concrete rafts.

As the interior restorations were getting near completion, a number of openings in the brick walls were created to enhance the floor plans, particularly at ground level where the shop fronts required exposure.

By the summer of 1983 the HVAC, building services and electrical distribution systems were being installed. Leasing began that fall. 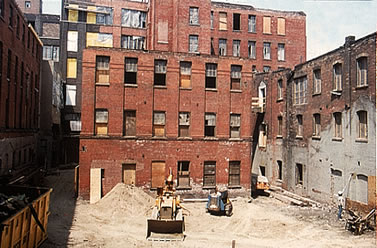 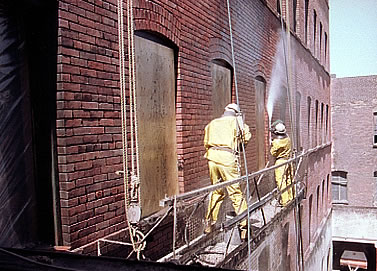